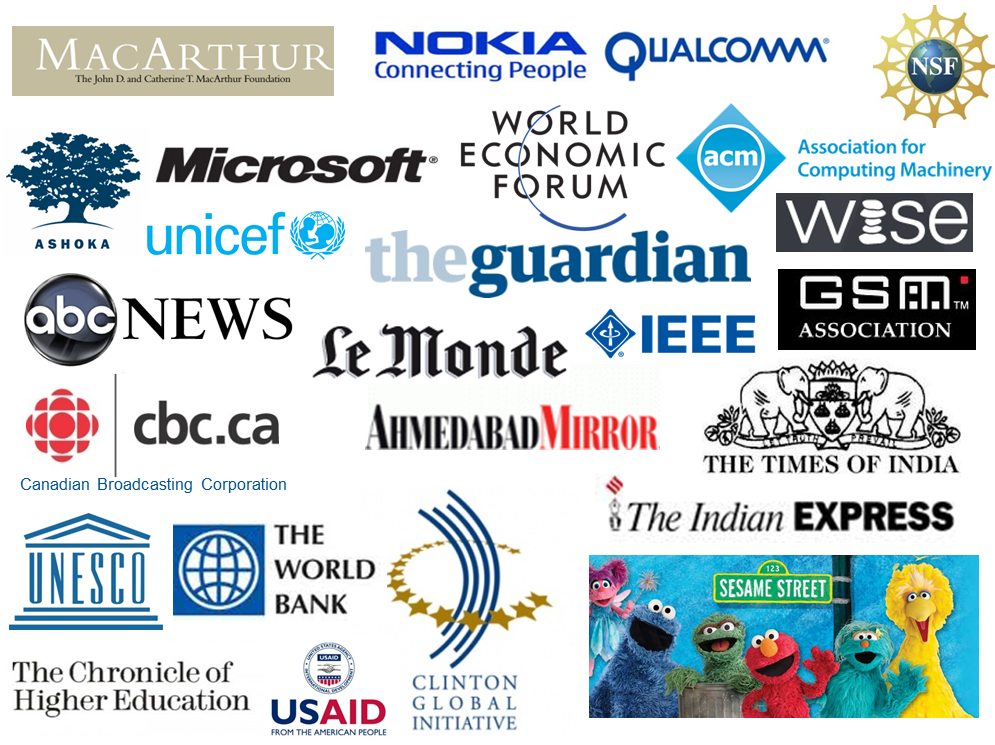 India’s Cell Phone Tutors. ABC News, aired on June 16, 2009. (if you click on this link, wait for the advertisement to play before the video proceeds to air our work)

Cell Phone: The Ring Heard Around the World. Canadian Broadcasting Corporation documentary, aired on public television on April 3 and June 5, 2008

M-learning Solutions: The MILLEE project and MGurujee mark the arrival of mobile phones as learning devices for the poor. Business Standard, India, May 11, 2013.

No Phony Business: How the Cell Phone Revolution is Sweeping the Indian Countryside. The Caravan: A Journal of Politics and Culture, India, July 1-15, 2009 edition, pp. 40-44

Smartphones are the PCs of the Developing World. New Scientist, August 1, 2007

Learning to Read and Write by Gaming. Scope, Massachusetts Institute of Technology, November 23, 2010

Cellphone Serves as Learning Platform for the Developing World. Communications of the ACM News, July 6, 2010

In Rural India, Learning English via Cellphone. The Chronicle of Higher Education, October 21, 2009

Striving and Surviving: Exploring the Lives of Women at the Base of the Pyramid. GSM Association mWomen Program, March 2012

Accelerating the Adoption of mLearning: A Call for Collective and Collaborative Action. World Economic Forum, February 2012

Innovation in Education: Lessons From Pioneers Around The World. Charles Leadbeater. Commissioned for the World Innovation Summit for Education (WISE) by Qatar Foundation, January 5, 2012

mLearning: A Platform for Educational Opportunities at the Base of the Pyramid. GSM Association Development Fund, November 2010 (With foreword by Queen Rania Al Abdullah of Jordan)